Have you ever needed to make a phone call at work, and feel your heart start to beat faster in your chest, or you suddenly feel warm and clammy?

When you do finally dial the number, you find yourself hoping the other person won’t pick up, and even experience a sense of relief if they don’t?

Or have you ever had the office phone ring on your desk and, rather than answer it, you sit there, waiting for it to stop, or hope someone else picks up before you have to?

If so you’re likely one of the millions of UK employees who suffer from phone anxiety.

Sometimes called telephobia, phone anxiety is a genuine fear of dealing with phone calls and is a serious issue for many employees and – as a result – the companies they work for.

Now, research by telephone answering and virtual receptionist provider Face For Business, has revealed the true extent of phone anxiety within the UK workforce.

The research, based on a survey of 1,000 office workers across several industries, and carried out independently in June 2022, seeks to uncover:

Employees who experienced phone anxiety in 2019

As we’ve mentioned, phone anxiety (or telephobia) is a fear of having conversations over the phone.

And it’s a problem on the rise in UK businesses with 65% of employees admitting to feeling some level of anxiety when dealing with phone calls in the last 12 months.

That’s compared to 62% of employees who said they’d experienced phone anxiety back in 2019.

Experienced phone anxiety in the last 12 month (by age): 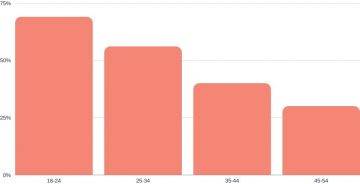 Employees unable to answer calls due to anxiety

In fact, for some employees, phone anxiety is such a problem it stops them from answering calls completely, either letting the calls ring out, go to voicemail, or be answered by a colleague.

Nearly two thirds (62%) of all employees say they have avoided answering a work call in the last 12 months due to nerves or anxiety.

The research paints an interesting picture across the workforce, as 55% of 18-24 year olds say they’re anxiety has prevented them answering the phone.

But that percentage is lower than some older workers. 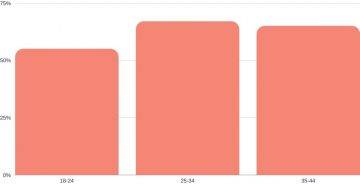 Have you avoided answering a work call in the last 12 months because of anxiety? (by age)

Why are employees so anxious about dealing with phone calls?

Being nervous about answering or making phone calls can be caused by a whole host of reasons.

According to our research, most workers who’ve experienced phone anxiety in the last 12 months did so simply because of a general nervousness about answering the phone and talking to a stranger (21% recorded this as the main reason for feeling anxious about phone calls).

Young employees in particular have a general dislike of phone calls as a means of communicating with customers. More than a third (36%) of 18-24 year olds in our survey said they held a general feeling of nerves about answering phone calls.

Concerns over confrontations with angry customers was next on the list.

Just more than one in 10 (11%) of respondents labelled this the main cause of anxiety – although this was much higher among younger workers.

Our survey found that more than a quarter of 18-24 year olds, and more than one in five employees aged 25-34 were most concerned about facing angry customers on the phone.

Another issue when it comes to answering the phone, is a feeling of anxiety of being overheard when dealing with customer calls.

This becomes a particular problem when the employee is concerned they might be judged by colleagues or managers if they handle calls and something goes wrong.

Overall, 11% of UK employees say worries about being judged by colleagues and managers was their main reason for feeling anxious about using the phone.

And again, it’s younger employees in particular who suffer from this anxiety, with 25-34 year olds most likely to be worried about being judged when dealing with phone calls (21% claimed this number one).

Finally, 7% of employees said they were concerned they wouldn’t be able to understand the caller’s accent (or wouldn’t be understood themselves) and would be judged because of it.

I’m worried about confrontation with an unhappy customer/caller

Didn’t know how to deal with the query

Anxiety about freezing on the phone

Thoughts about being judged

How severe is phone anxiety in the UK workforce?

Perhaps one of the most worrying things our research about phone anxiety in the workforce has uncovered, is the severity of the anxiety being experienced by some workers.

Overall, more than a third of employees surveyed in our study (35%) said they rated their anxiety levels between very and extremely anxious when thinking about dealing with work calls.

And it’s not something that varies particularly among age groups:

Percentage of employees who rate phone anxiety between “very anxious” and “extremely anxious” (by age):

What has working from home done for employee anxiety when it comes to phone calls?

Much has been made about the pros and cons of working from home in the last few years as COVID-19 and the “new normal” meant more employees than ever were forced to abandon the office for the kitchen counter, bedroom or (for a few lucky ones) the home office.

One of the big issues that has been raised about the problems of working from home, is the lack of immediate support to employees when they need help.

And when it comes to dealing with phone calls, working from home has exacerbated the problem.

Four in 10 employees say that working from home has increased their feelings of phone anxiety in the last few years.

Maybe not surprisingly, it’s younger workers (or those with less experience) who are feeling the biggest brunt of increasing phone anxiety while working from home.

Among the biggest reasons for feeling more anxious about answering the phone when working from home, is the lack of any immediate support. 12% of respondents to our study said this was their main issue with answering calls from home.

Nearly one in 10 say they’re nervous that they won’t be able to help the caller and won’t know what to do.

And 11% of respondents overall said they were most concerned that they’d have to deal with confrontation from customers if they were unable to help the person immediately, and were unable to pass them on to someone else who could help them.

What this shows is that any business moving to (or already in) a hybrid or fully remote working model must consider the implications for phone calls and employee training and development.

How do employees prefer customers contacting them?

With phone anxiety on the rise among UK employees, it’s no surprise that phone calls are the least preferred method of contact with customers.

Nearly two thirds (65%) of employees say phone calls are their least preferred method of communication.On the other hand, 78% say they prefer to deal with customer enquiries over email, because it’s something they can deal with in their own time, and they don’t run the risk of a customer becoming angry at them.

Most preferred method of customer communication

Are employees being trained to deal with phone calls?

Dealing with phone calls can be a daunting task in an office, as our research backs up.

They can be unpredictable and especially difficult to deal with when you’re talking to angry customers or are struggling to resolve an issue immediately.

Plus, you’ve got to deal with call transfers, taking accurate messages and recording information.

And all this can be happening when you’re trying to deal with urgent tasks.

With so much riding on the success of answering phones, and employees being anxious about dealing with them, you would think employee training on phones would be standard.

And employees agree that it should be.

In fact 60% of employees who said they’d experienced phone anxiety in the last 12 months believe that training would help increase their confidence in dealing with calls and reduce their anxiety.

Despite this, more than three quarters (77%) of those surveyed said their company offered no training on dealing with phone calls, or even how to use the office phones.

Do you think that training increases your confidence in dealing with phone calls?

Does your company offer training on dealing with phone calls and the phone system?

Why businesses need to invest in their phone answering

Dealing with phone calls is an essential part of a successful business.

Whether it’s dealing with new business, helping customers with their enquiries, or making sure problems don’t escalate into full complaints of your service and the potential loss of business.

If a business is going to rely on employees to deal with phone calls, then it’s clear that more needs to be done to offer training and support.

With a rising number of employees feeling anxious about dealing with calls, and a large proportion actually avoiding calls due to their anxiety, it’s clear that more needs to be done to make employees more confident and capable of dealing with calls.

This is becoming even more important with employees spending more time working remotely or from home.

What our study has shown is that a high proportion of workers feel that working from home is increasing their anxiety over business calls, largely because of the lack of immediate support if they’re struggling to help a caller.

That’s particularly true about younger workers, many of whom lack experience dealing with calls and are being left to deal with these issues with little or no training.

Without the proper investment in telephone answering, businesses run the risk of losing business or damaging their reputation when it comes to customer service.

Could a telephone answering service – like Face For Business – help?

It’s important that employees feel confident dealing with phone calls so they can deal with new business calls, or help customers with more complex enquiries.

But it doesn’t have to just fall on your team to deal with incoming calls, especially when their time could be better spent dealing with other things that add value to your business.

A telephone answering service can be a good option for a business in need of phone support.

With a telephone answering service you never need to worry about missing calls, but you can also be confident that when a call does go through to an employee, they’ll be better equipped to handle it.

That’s because, with the right telephone answering service, employees will be given all the relevant information they need to deal with calls before they escalate.

By providing employees with relevant information, and handling basic enquiries for them, they can be more confident that when they do have to answer the phone (alongside having training) they’ll be better equipped to deal with calls.

If you’re interested in a telephone answering service but aren’t sure how it will work for your business, get in touch.

We offer a 7-day free trial so you can try our service before committing to a contract.